There's a three-parter on the telly at the moment (BBC 2) using the Camino de Santiago as the hook for a bit of reality/faith TV. Seven celebs toil up the Pyrenean foothills and slog across the northern Spanish plains for the benefit of the cameras, struggling with notions of pilgrimage and faith as they go. At one extreme is comedian Ed Byrne presenting himself as a Northern Irish atheist, and at the other is the Rev. Kate Bottley of Gogglebox fame playing a straight up and down C. of E. vicar. Neil Morrissey and Heather Small ('Look for the hero inside yourself') are in the mix too. It's a bit of a dampener that they're not going the whole hog, just selected sections with intervening automotive assistance before the final 100k hike into Santiago de Compostela, but hey, who am I to carp! We followed the route a couple of decades ago, but elected to do it all by car, Matt being of Middle School age at the time. Even that diluted experience was highly moving and memorable. We still talk about it often.

Emilio Estevez's film 'The Way', with dad Martin Sheen in the lead role, reduced me to emotional tatters when we DVD'd it a few years back. Drop whatever you're doing and buy a copy now! And while the first part of the BBC programme didn't quite do that, it still packed a surprising if intermittent emotional punch.

Now here's an idea for the ultimate in slow television. What about a real-time walk along the Camino? Head cam for the visuals. Endless interesting conversations with people along the way. You could turn everything off at night-time. Or not, if you're Channel 5. Come on someone, what's not to like if you cost it per hour of telecast....?

So anyway.  Here I am back on my own little local pilgrimage after a couple of months' absence because of seasonal afflictions and the interesting weather. I'm walking to Peterborough from my 'home' church in Weston Favell, Northamptonshire via every one of the approximately 400 churches in the diocese. Each walk is a circle. Every circle must touch another one somewhere on its circumference. I'm about half way through the project, and it's nearly two years since I started. When I was younger, oh so much younger than today, I wrote a song called 'Almost half way through' ( three score years and ten and all that) which cheered up friends and family enormously. Not.

Out of Badby I take the path opposite the church and wheeze up the hill across the fields and into the woods. There are patches of dirty snow in the hollows five days after the 'mini-beast from the east' (I like the primary-school referenced nuance of this!) dumped half a foot on the western uplands of Northants. A woodpecker is drilling a tree nearby. Tits are piping the shrill two-tone call that's their speciality. A kite circles and mews. Glossy deep green bluebell plants litter the woodland floor, but spring is late: I imagine it'll be mid-May before we see any flowers. I start to look at the topology around me, and realise that there must have been quarrying here in the past. The ground has a far-from-natural set of contours. Emerging up onto the wide expanse of Badby Down, I rest for a drink and a sandwich before descending to Fawsley, retracing my previous walk. It's a lovely day, but the wind is brisk. It's chilly up on top. 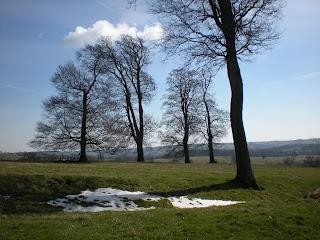 There are sheep everywhere, surrounded by their new lambs, sometimes twins, sometimes singles. The pairs stick closely to each other, sitting nose to nose, or trotting to a safer viewpoint as I pass. A few singles sprawl inelegantly, dozing under the warming sun. I walk up and then down again to Westbourne Farm and wonder what the story is there? The house is massive, far too big to be feasible for one family, I'd have thought. Why haven't they divided it, and rented out some of the accommodation? Of course it's true that in winter you'd need a 4x4 and a bit of courage to get out and about, and there's no corner shop, but to this naïve outsider it seems like a sensible piece of sustainable development. But then, I think, if I owned such a place, would I want to give up my privacy and seclusion?

The path moves up again, skirting the highest point of Everdon Hill before it drops sharply into the village. I've always thought of Everdon as a rather untidy place, and it's true, it does straggle as the road takes various right angles through the settlement, but today, walking its length for the first time, it seems more gentrified and sophisticated than I'd thought. St. Mary's church is down near the pub after I've passed the much-valued Field Centre which now occupies the old Primary School building. There's a stone-mason's van outside the church. Inside the pews are covered in dustsheets, and there's scaffolding along one wall. The area around the font, now cleared of seating, looks impressively large. A servery and loo are being installed, along the nice oak-panelled lines I'm familiar with from other churches in the diocese. Good for them.

I swig a GB in The Plough next door. I'm addressed as 'young man' by the guy behind the bar (probably younger than me, though he doesn't know it!), so I'll come back again. Actually the food looks worth coming back for, though unless I've missed the dining room I'm slightly puzzled as to where you'd eat it. There are some other noisy walkers occupying most of the space in the bar. They talk football in northern accents, though it would appear London is their usual stamping ground. Well, most people are Man U fans now. Or is there a turn of the tide against 'Mockney' in favour of 'MUckney'? I turn up the lane towards Little Everdon with its spacious Victorian Hall, which after the Second War became the venue for one of the longest lasting vestiges of country house cricket under the ownership of Captain Richard Hawkins. Friend Mark Mason, artist and co-originator of Gophers! Central TV series, one time (still?)fast bowler, used to come to play here on the beautifully appointed little ground on the Weedon side. At this point I join the Nene Way on its way west, and note that everything on the estate seems so much tidier and more beautifully thought through than I remember. 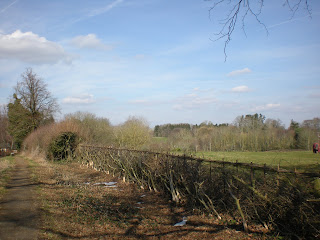 This hedge is just one example: a country craft much less in evidence than used to be the case. On the far side of the house I see many other instances of the same care: a new plantation, stiles and gates kept in good order (one used to have to negotiate a huge pile of farmyard ordure), and the path clearly signed - but on a line away from the Hall, which is fair enough. I wouldn't like people leering through my lounge windows every five minutes either!

Almost immediately the spire of Newnham church is visible on the far side of the newly risen Nene. I bounce up and down the ridged fields and then haul myself up what I know is the penultimate hill of the day, dropping into the lane where a farmer is so engaged with trying to free up a water supply damaged by the last week's cold weather that he doesn't hear me until I rattle the bars of the stile by his right ear. Nice day, I remark, at which he looks askance. Not so good in the wind, he replies with feeling, and that's right. As the cloud cover's increased, the breeze has become more marked and there's nothing to take the edge off it. 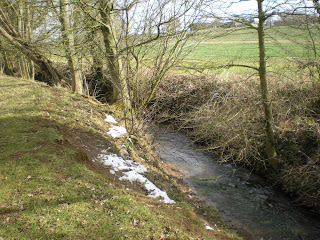 St Michael and All Angels, Newnham has a very striking 'hollow' porch on the road. It's a church I've been inside before, and I'm expecting a rather musty, fusty experience, so I'm surprised to find the interior much smartened. Down both wings and at the rear are box pews, which now look polished and loved. It makes me smile that the 'free seats' are right in the middle, the best seats in the house, you'd have thought. Perhaps those who paid for the boxes felt less obtrusively under the beady eye of the preacher, who could more easily wag his finger at the hoi polloi in front of him. In St. Michaels, you step down to the little sanctuary, which I rather like.

From Newnham it's a mile and a half across the wet fields back to Badby, and now the breeze is in my face, sapping the energy, bringing a tear to the eye. It's surprising how much capacity for endurance I've lost in a couple of months. There's work to do. Our local Methodist church has a wayside pulpit which tells the world that prayer is the Christian's training regime (or words to that effect). No, it really isn't. It's the natural conversation one has with one's Maker and Redeemer, not a chore. However, it's something of a puzzle that it's easier to do when out for a walk than in church, and even then, easier to do it in the first couple of hours of a walk, before one gets tired and the legs hurt. I worry that when I'm old and ill and in extremis I shall find it impossible to do. So maybe it's as well to get the hours in now. Is that what the Methodists mean? 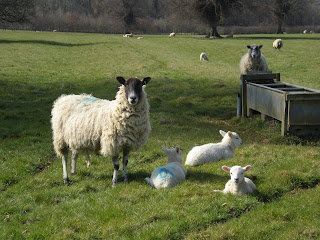 
Father God
I hear that Millennials
Have no time for religion
Except in Poland and Ireland
(Which don't count of course
Because the Polish and the Irish
Are the butt of everyone's jokes, aren't they!)
Is it our fault?
Have we set bad examples?
Have we failed to make the case?
Have we looked too desperate
In our desire to talk them into the Kingdom?
Or are they just Rich Young Rulers
Who have so much to lose...
Father, look in compassion
On all your children
Young and Old
And bring us together
To build a future here and in heaven
With you at its heart.
Amen
Posted by Vince Cross at 10:16 1 comment: