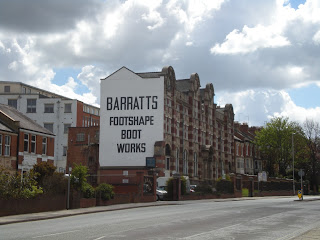 I don't have to stray far from my local neighbourhood to find myself on roads I've never walked before, and possibly only driven once or twice. It takes about ten minutes. I realise I've been somewhat selective about the directions I've travelled on foot from my front door these past thirty years.

The aim of this first day's 'pilgrimage' is to describe a circular route around the middle of Northampton. On subsequent days I think I'll make a succession of elliptical walks like the petals of a flower, stretching into the town's suburbs. And after that...well, I'll make it up as I go along.

I was last in St. Alban's church nine years ago for the funeral of a friend's father. Inside it's much brighter and more welcoming than I'd remembered. Now there are chairs where before there were pews, and Irene the smiley churchwarden shows me the smart new servery at the rear, stage left. People are coming and going in the hall: the buildings are alive at 9.30 on a Wednesday morning. I read Psalm 1, and pray briefly. Irene leaves me with a comprehensive history of this 1930s church, and the comment that if everyone does that for me I'll need a shopping bag to add to my rucksack.

St. Matthew's is open too: great Anglo-Catholic home of the arts, built on 19thC brewery money (how very entrepreneurial and modern!). The midweek eucharist has just finished and it's coffee time. There are two surprises. Firstly Marjorie Snedker, one of our own St. Peter's people, spots me and comes to talk. Then there's another face I perhaps recognise, and yes, it's Richard Alcock who forty years ago was an education officer in town when Sue and I were starting out in teaching. We reminisce about Frank, a mutual acquaintance, sometime Head of the troubled school where I worked. Between the Henry Moore and the Graham Sutherland, I'm shown the newer sculpture of St. Matthew which stands by the lectern, and promise myself I'll come back and spend more time in the company of these important works of art. Outside I run into the nice Rector, Fr. Nicholas and explain myself, but promptly put a foot in it, because a friend has wrongly told me he was in the process of leaving. First Fr.Nicholas had heard about it apparently. Whoops!

Across the Racecourse, on the rise into Kingsthorpe, lies Holy Trinity. The terraced houses crowd in on the church. What do the inhabitants think of this unavoidable Christian presence in their midst? I've never worshipped here, and it's shut today, so I sit on a tree stump and pray for Anthony, the priest, and his congregation. The parish is bundled with St. Paul's, Semilong, on the far side of Kingsthorpe Hollow, which I'm shocked to find no longer exists at all. I only knew that the building had major structural problems. In the absence of a daily evening newspaper, one misses events like the demolition of a significant church, and time races on blindly. So I content myself with going through the colourful doors of the nearby Roman Catholic Cathedral, and talk to Elizabeth who's tenderly arranging the flowers in front of the beautiful tapestry reredos. She relishes this job, though after her stroke it's not as easy as it once was, and she gets told off if she makes a mess. She explains that Jesus lives in the chapel to one side.

I move in on the town centre, up ancient Sheep Street to Holy Sepulchre, the 'Round Church'. This is 'down and out' Northampton, so I know that unless something is actually going on in the church, I won't get in. There isn't and I don't. I circumnavigate the new permanently temporary bus station, and walk through the site of St. Katherine's lost church in search of the oldest existing Northampton building, St. Peter's Marefair. It's now decommissioned: a friend recently played a rock gig there, Tangerine Dream style. I'd hoped to get access to the churchyard, but the gate is locked. Next door to the church was once Northampton's great Saxon hall, watching over the Nene. I wonder if the low clerestoried profile of the church mirrors how that might have once looked.

At the far end of Gold Street I spend some time in the resplendent choc 'n' gilt All Saints, our 'civic' church, rebuilt after the 1675 Great Fire of Northampton. (Oh yes, we had one too, and so did Towcester, a year later. Copycat crime?) Local entrepreneur Tony Ansell's bistro is to either side of the church entrance: God and Mammon working hand in hand. They're due a new incumbent in the autumn, and then perhaps All Saints will happily become again what it should be in the concert of local parishes.

At evangelical St. Giles, situated appropriately by the General Hospital (St Giles being the patron saint of lepers and all that), I leave a card for the Rector, Steve Kelly, in the church office. Then, walking up through Abington Square, I lean over the churchyard wall where St. Edmund's was until the mid 20thC. To the north of the Wellingborough Road lies St. Michael's on its inevitable Mount. Fr. Michael is in his office and we chat. I pray on the steps in front of the West Door, and notice that the church is shared with the Romanian Orthodox. Not far away are a number of small African Pentecostal churches and the Jesus People in their converted cinema on the corner of The Mounts. A few hundred yards to the north is Mount Pleasant Baptist, where we worshipped when we first came to town in 1974.

At Christ Church, whose west end is by architect Maurice Walton (who designed our own house and lived in it with Jill and the girls before we did), I find David Wiseman in his vicarage study. And in St. Peter and St. Paul's Abington, Tony, the Director of Music, is tidying up after a visit from the organ tuner. I'd forgotten how intimate and lovely the building is in its park setting. Outside, a new Northampton family, perhaps eastern Europeans, father, mother, and child in buggy, are eyeing up the church curiously. Will they be drawn in? What will they make of us?

Northampton is growing and changing, but it's still a small town at heart. And still, in small measure, a shoe town. Among many other professions, St. Peter is the patron saint of cobblers.

Stats:  18.6 km walked. Temperature 10C max. Weather: fine. No precip. Nine churches visited plus one decommissioned plus two ancient sites. Three incumbents encountered: all friendly.  Note to self: do not treat this physical and spiritual exercise like a bout of ecclesiastical Munro-bagging!!

Lord,
Give me eyes that see intelligently,
Ears that listen sympathetically,
A mouth that speaks graciously,
A heart that is open to possibility,
And unblistered feet, resolute in the journey.
Amen 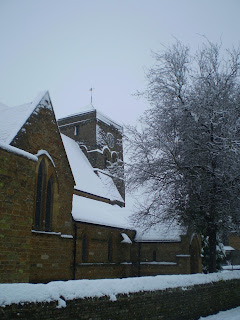 This pilgrimage starts from home -literally by walking out of our front door, but then properly from our beloved St. Peter's just four hundred steps away through Weston Favell village. It's been our spiritual home for at least thirty years since two year old Matt expressed interest in the church crèche, but for nearly a decade before that we'd been occasional worshippers, taking an antidote to less comforting ecclesiastical surroundings.

It remains a comfortable place, with a history that intrigues. It was briefly significant in the 18th century because of James Hervey. Hervey's Cottage still stands to the south-west of the church. He moved there briefly while the next-door Rectory was being refurbished. Like all homes, this one has seen its share of turbulence over the years. There've been times of life-affirming joy and times of profound sadness even in the arc of our own Weston Favell experience. Home inevitably means differences of opinion, sometimes sharp and deeply felt. It entails accommodation to the needs of others too. We see this objectively in our church international. We feel it in our guts at the local level. Sometimes homes break up when the differences become irreconcilable. We hope and pray it will never happen to us. We apply willpower and seek God's grace to try to ensure it doesn't.

The traveller traditionally sets out from home with a spring in her step (Laurie Lee on a midsummer morning!) savouring the freshness of the morning air, relishing the excitement of a journey into the unknown, even if that 'unknown' is relatively safe, as one assumes rural Northamptonshire to be. That said, on a solo country walk a couple of years ago in deepest Hertfordshire, I stepped ( I thought about saying 'bounded', but that would be a gross exaggeration!) over a stile and put one boot straight down a deep rabbit hole on the far side. In a moment I realised how close I'd come to breaking an ankle in a place where rescue would have been irksome and awkward.

These days, it's hard to start a walk without thinking of those who make quite different journeys on foot, seeking safety and refuge from a home or country where life has become intolerable or threatened. I don't know what we can or should do about this: the internet has changed the rules in terms of policy towards displaced people as it has about much else. These despairing millions cast a pall of obscuring smoke across my own walk. One thing we know: by the time I fetch up in Peterborough, if I ever do, new streams of refugees will still be loading their most valued portables into bags, carts and pick-ups and heading off into an uncertain future with a heavy heart. 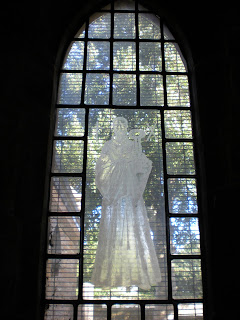 The image you see below is going to be my equivalent of a scallop shell for the road. Each lucky incumbent of the parishes I pass through will find a card with this photograph pushed through her/his door. On the reverse it says: 'I stopped at(St. Beefburga's) today and prayed for you and the people of the parish', together with a brief description of what I'm up to.

The ellipses in the picture symbolise the labyrinth of paths to be walked, and the distant multi-cruciform window speaks of The Passion and The Church.

I took the photograph in the foyer of the posh and arty Vienna House Hotel in Lodz's Manufaktura precinct. It was the week during 2010 that the Polish president was killed in an air disaster and the volcano in exploded in Iceland. For want of any other working transport, we had to catch the bus back to London, taking 25 hours into Victoria coach station. That was quite a journey too! 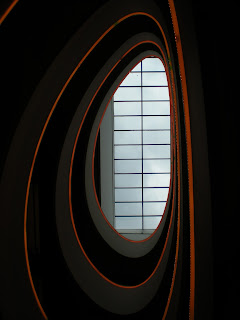