Like it says on the tax form (more or less) - if you've had enough of the dark and serious, if one more 'Thought for The Day' themed around Britain's place in the world is going to make you flip your lid - then please go straight to Letter B

But for those of you still with me...

There's a terrifying song by Don Henley called 'New York Minute' which describes the precariousness of life in the Big Apple. Aaron Sorkin, who knows a good tune when he hears one, used it in the soundtrack to 'The West Wing's special episode commemorating the events of 9/11. 'In a New York minute, everything can change'.

I suppose Christians recognise drastic, traumatic life-change as much as anyone. The shared experience of any Christian community inevitably means the embrace of others' personal tragedies. At the heart of most Christian traditions is the notion of 'conversion': the swapping of one life for a new one, a dying to the old self through the waters of baptism.

Well, the events of two Thursdays ago were as big a political step-change as I ever want to experience: a punch in the guts, the death of a dream. I truly think, though others will disagree, that for Britain and we British the world will never be the same again, and not in a good way.

Two things. Firstly this is the kind of moment when some of us take comfort in the idea that: 'None can thee secure/But one who never changes/Thy God, thy life, thy cure'. Except I want my God to encompass and identify with change as we experience it, to be 'always becoming'. But that's OK. I don't understand much Wittgenstein, but I've always 'got' the idea he explored in The Philosophical Investigations of the transforming figure, the famous duck-rabbit. Entities can flip, can be perceived as one thing at one moment and another at another - and it probably really happens out there in the universe a lot more than we yet know. If God is all, then I think He's like that too. I'm hoping He's somewhere in this change and decay which all around I see.

Secondly I notice in myself a tendency to read all encountered behaviour in the light of this new, more cruel world. Is this happening to you too?

Which brings me, almost literally, to Harpole...

German Car No. 1 needs more attention, possibly on strike over Brexit. So I leave it with the garage as before (see June 2nd) and retrace my steps towards Duston, exercising an urban walker's imagination as to what the developers might have done with the footpath marked on my OS Explorer. Before I locate it skulking behind the hospital, I see something I've never seen before. On the dual carriageway out of town a car steadfastly refuses to give way to an ambulance on its way to a 'shout'. The car ignores the blues and twos for a couple of minutes, blocking in the paramedics. Almost unbelievably, it then gives chase to the ambulance as it accelerates towards the M1; a callous, egotistical, perhaps drug fuelled misuse of the roads.

Then over the next three hours I encounter footpaths that have been removed or deliberately obfuscated, electric fences where they shouldn't be, gates tied shut across a long-distance path, notices advising of bulls in fields where there clearly aren't any, bolts deliberately filed back at kissing gates to prevent them being opened. At one moment a dog noisily worries at my heels before its laughing owner calls it away. Since he's bigger than me (the owner, not the dog) I don't argue, just rage silently at the crassness and unkindness of the world. But...

Having waisted my way through a bean-field, where the mud lay dinted by someone's nag a few weeks previously, I pause at the village limit for Harpole. A notice says that (hurray!) the church is open each day for inspection of the local plan. Local plans are very much the thing, don't you know. On I go, past Carr's Close (J.L.Carr was a Northamptonshire author who wrote a book called 'The Harpole Report', its protagonist being one George Harpole. Carr was in the habit of naming his fictional characters after real Northamptonshire places!), and wondrous to relate, people start to say hello. I've entered an alternative universe called 'Friendly'. It begins with two chaps pushing barrows towards the allotments. It continues in All Saints Church, where Bridget and Graham Paul are tying up the bells, prior to teaching a few campanological fine points to two Rothersthorpe parishioners. Outside again, a couple more people greet me warmly before a young woman walking her dog stops to ask me how far I'm going and to tell me what a lovely place Harpole is. And then I share my stroll on to Nether Heyford up Glassthorpe Lane with Pat who hails from Dorset and is an enthusiastic rambler. Sadly her husband's dodgy knees now prevent them sharing this pleasure together. At this point I feel pretty duck-rabbited. On a dime the world has changed from nasty to nice.

In medieval times, Glassthorpe was a village too, and is mentioned in the Domesday Book, but by the 18thC it had depopulated, and now there's just the farm. It comes to me that an old friend of ours, Roy Hill, once lived with his wife Di in Harpole. A wonderfully gentle man, Roy succumbed to early onset dementia, but in his prime he knew a great deal about 'lost' villages. He must have walked here often. He also properly corrected me when as a Kentish Man I protested that there were no hills and woods in Northamptonshire. There are! Pat, my walking companion, remarks that around here it looks more like Derbyshire and it's true: the hill to be climbed feels much more than its 140 metres. On the far side the sketchy path drops sharply to the Mid-Shires Way which then draws a bead on Nether Heyford.

Once upon a time, Upper Heyford (not to be confused with the place of the same name in Oxfordshire from which USAF F-111s used to take off to bomb Colonel Gaddafi) and Nether Heyford were called Heyford Superiore and Inferiore. Generations ago I guess this may have led to some psychological problems but the inferiors had the last laugh. Upper Heyford is now a tiny footnote on the A45 while Nether Heyford is a large, thriving village with a huge green and an attractive range of buildings including the church dedicated to Saint Peter and Saint Paul. It too is open (I'm having to eat my words from a fortnight ago!) and its light airy interior looks lovingly cared for: a mix of ancient and modern. The quietness inside is deafening: my tinnitus is ringing away merrily.

The furnaces are gone from Furnace Lane now. It leads up to the main drag of the Grand Union Canal. I turn left onto the towpath while the Birmingham to Euston main line thunders away to my right. The canal twists and turns until a little way past a large marina the lane to Bugbrooke appears. I'm disappointed by the pub in the village which despite the notice outside isn't serving food, but not by St. Michael and All Angels Church. A dark wood rood screen separates nave and chancel, rendering the former an indistinct cave of mystery, but the literature on the table by the entrance suggests a robustly evangelical attitude.

For locals of my age the village of Bugbrooke is still synonymous with the 'Jesus People' who bought the 'big house' and much else besides in the 70s at a flowering-time of charismatic religion around the country. It must have been strange (perhaps still is?) to be worshipping or ministering in a local Anglican church which the Christian community in the house next door deems to be in apostasy. In contrast, conservatives like me suspected the Jesus People of  brainwashing. The 'Jesus Movement' certainly threw up some curiosities, among them the 'Children of God', who were founded in California but came to Bromley. Unlike Joni Mitchell who encountered a Child of God on the road to Yasgur's Farm, I met my wispy-bearded adherent on a train out of Victoria. We tried to convert each other. Neither side was successful. I hope he found his way out of what was rapidly becoming a very troubled, even perverse organisation. These days the Bugbrooke 'Jesus People' have become almost mainstream, their pattern of worship and organisation much copied, but still not my cup of tea. 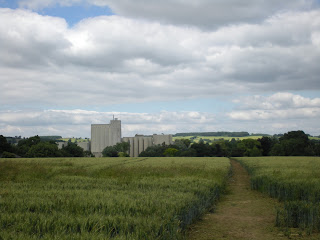 Through fields of barley I come to the Nene Way at Heygates Mill, sitting like a white cathedral on the plain by the river. The Nene Way used to be beautifully appointed and waymarked, but now it's showing age. The stiles are overgrown, and I have to thrust through piles of oilseed either side of the motorway as I pass into the site of Fairfax's 1645 Civil War camp. The village of Kislingbury is close by. St. Luke's is shut but I pause to read a psalm outside where there's a shady bench. An elderly black lab pulls its owner onto the slightly too adjacent grass where it pees uncertainly. 'He likes it here', she says. 'I can see,' I reply.

The Psalm of David (18) speaks uncomfortably of war and revenge: it's language is stark and uncompromising. As I sit I reflect that the Civil War may have been the last time Britain was as divided as it is now. The consequences of that were long-lasting and terrible. And what now? I'd like this duck to turn into a rabbit. Or the other way round.


Father God
We confess
Sometimes we too have put profit before people
Position before principle
Power before purity
Please give to all in authority
Wisdom and integrity
Sound judgment and a sense of justice
Discernment and a desire for the common good.
We pray it through Jesus Christ
Your Son
Our elder brother and example
Amen.