I park by the Windhover pub at the bottom of the road to Boughton, and walk over the bridge towards the Bramptons. I could go up the lane in front of me directly to Church Brampton, but there's no footpath on the road and you wouldn't believe the speed of the traffic zonking down it. So I tramp up beside what used to be the A50, now demoted to the far less important sounding A5177, and walk to Chapel Brampton first. I'm curious. I can see a cross on the map so the chapel must sit beside the primary school. I wonder how hard and fast the delineation ever was between church and chapel folk in the twin villages. But all that's extant on the ground is an extremely shabby shack. Was that really the eponymous chapel? It looks more like a scout hut, and this is odd given the desirability of other property hereabouts. A few weeks ago I was within earshot of a weekend bargee who peered out, beer in hand, from his rented narrowboat towards a Porsche parked beside a barn conversion, muttering enviously, 'There's a lot of money in these parts...'. Which the evidence amply supports as I walk past the all the nice houses.

We're in Lady Di territory now. There's the Spencer Arms pub, and there's a Spencer Close, and St. Botolph's, Church Brampton is one of the churches in the Spencer Benefice. You might expect the church to be sitting right atop the hill, visible from all directions, but it's on the far side overlooking the valley, facing Harlestone and roughly in the direction of Althorp, the Spencer seat. Outside in the road two women with dogs swap hellos with me. The dustcart is collecting recyclables: I never realised the dustpersons sort the plastic and glass by hand as they go, house by house. I hate the way they throw the boxes around on the pavement outside our house, but my, it's a hard and unpleasant job. St. Botolph's churchyard is tidy, but I can't see the name of the incumbent anywhere. Black mark. St. Botolph was an Anglo-Saxon, more likely a Botwulf, and lived somewhere in East Anglia in the seventh century. What he did to earn canonisation I don't know. I remember St. Botolph's in Cambridge: back in 1971 an extremely cold place in more ways than one. 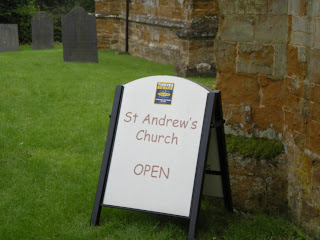 A long bridle path angles away north-westwards from the village past Brampton Hill Farm and Cank Farm. I have no idea about the bona fides of the website 'lingomash' but it reckons the word 'cank' is Midlands dialect for 'gossip'. Unfortunately there's no one to chew the cud with today, just lovely miles of rolling countryside settling into autumn under a hazy grey-blue sky. Eventually I come to a lane and turn down a hill steep enough to have both an OS arrow across it and a salt box for icy winter times, to Holdenby Mill. Looking at the little stream running underneath the road, it doesn't look to have ever had the power to generate energy, but it must have done so once. Away from the Mill there's a relatively long pull up to the busy road to Spratton sitting on its ridge at the grand height of 136 metres. Indeed, St. Andrew's, Spratton is a church in the 'Uplands Benefice', which sounds very cheery and altogether better than being part of a 'Down in the Miry Pit Benefice' (though I'll store that one up for future satirical purposes - very Stella Gibbons!) And my goodness, Spratton is jumping. I meet Vivienne, who likes a good natter, outside her house. She tells me there's a festival centred in the church over the course of the week with all sorts going on. There's a 'Spratton's Got Talent' evening, a concert by 'Boobs and Brass' ( as you may have guessed, a women's brass band franchise), and if I'm lucky I may get a coffee in the church's 'Café Doris'.  But when I walk through the open door, the café is closed and there's a wedding rehearsal taking place. Later this afternoon there'll be an organ recital. Linnet Smith, the vicar, is taking a young couple through the service. 'And then what comes next? Ah, we're all going to sing, 'Lean on me', are we?' she says.  Apparently there's Saints' rugby club interest in the nuptials. Perhaps, in view of the choice of music, the groom is a front row forward. Much discussion of blue tooth speakers ensues, forte e nobilmente from Linnet, un poco piu piano from the couple. I leave them to it and retire pro tem to the well-appointed King's Head. When I return, I chat with Frances of the W.I. about the church. She's laying out cake and coffee for the organ 'do'. I tell her I've already admired the splendid and unusual medieval tomb of Sir John Swinford, and we agree the café at the rear of the nave is a great boon, the result of a generous legacy and a previous incumbent's vision. Even so, the congregation of a Sunday morning she estimates at less than fifty, which in view of the liveliness and humour of the place and its centrality to Spratton's life, seems meagre. What more do we have to do? I find myself (silently!) asking. Frances' husband Philip used to work with our friend Michael Jones, the jeweller and pioneering Northampton entrepreneur: they knew Maurice Walton too, who designed our house, and was later in life a non-stipendiary priest in charge of the Spencer Benefice churches. Frances and I reminisce a little about Northampton of the 60s and 70s, until more concentration on cake is required.

Away from Spratton it's a mile and a bit of hazardous tramping along a 'B' road up to Brixworth. You really wouldn't want to be doing this a) when you were in anything less than like a totally alert state dude (thanks to the King's Head coffee, I'm good n'perky) or b) if you were in the company of anyone else you cared at all about, and therefore worrying about the possibility that it's not only you who should be prepared to throw yourself over the kerb into the roadside nettles and hawthorn. I survive the experience, cross the narrow bridge in the valley, and with gratefulness head on the same line up a field path towards the Brixworth spire.

As I push open the gate to the churchyard, I see a bloke exercising his terrier (not a euphemism of any sort) and as I approach, realise it's Andrew Bransby, once our immediate neighbour, one time teacher, cricketer and general good egg. I haven't seen Andrew for more than a decade. We embrace and catch up, exchanging family news. He plays keyboards for the band in the local Christian Fellowship, still lives in Brixworth, still umpires for their second XI. I didn't know about the keyboards thing: previously he helped out at St. Mark's Whitehills and St. David's too, and he also goes to play and sing songs You Once Loved at a seniors' home. I ask about the cricket. Not a good standard, he says, not at second team level anyway. Are they well-behaved? Mostly, according to Andrew, except ******** (a village recently visited on my travels). And 100 overs of adjudication on a hot Saturday afternoon takes some concentration. It's a joy to see him, and I hope we get the chance to do so again soon.

All Saints, Brixworth gets three stars from Simon Jenkins in his 1000 Best Churches book (which is still a considerable tribute), but if he revisited it now, maybe it would join the elite bands of those meriting four or even five stars. Since I was last here the restoration work seems to have been finished gloriously, and the interior of the church is a wonder to behold. It's a place of mystery too, not just because of its exceptional, unique age, but its size relative to that, and the eclectic nature of its architecture. The suffragan bishop of the diocese takes his/her title from here, of course, as an acknowledgement of the likely spiritual importance of Brixworth from Saxon times onwards. There's even Roman brick and tile in the technically challenged arch in front of the apse which encloses the altar. Yes, we know, churches in the true sense aren't the building, but to worship in one like this gives a head start in meditation and faith, taking one back almost to the dawn of British Christianity. What a beezer place! 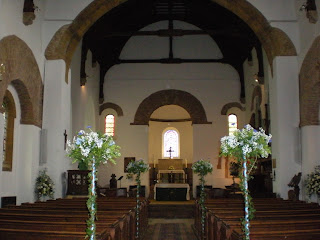 Stats man: 19 km. 19C. Haze and occasional sun. Pied wagtails everywhere. Three churches, two of them open: a majority - hooray!  Old friends: one. No park benches, so we didn't sit on them like bookends (cf. Simon and Garfunkel - who incidentally I'm getting into again. Without them no CSNY?) Grim-faced motorists: numerous. Dog-walkers: four and cheerful.

Dear Lord
Thank you for the communion of saints;
The greater cloud of witnesses;
Those we have loved long since
And lost awhile;
Those whose influence
Is still written for good
In the book of our lives.
May we by our practical example and teaching
Be for others
As they were for us.
Amen.