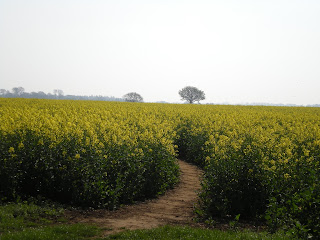 It's going to be warm, so the weather pundits say, and indeed it's been dry and mild right through these last few days. And so that strange thing happens as the British give themselves permission to cast off winter clothes and live the dream, hood down, club music hitting every beat squarely, flesh and bling well on fat n'fun display. Driving along the multi-ethnic, multi-pubbed Wellingborough road on Thursday evening it felt like the Boys were back in Town. There were tint-windowed, suspension-lowered GTIs everywhere. People were spilling off the pavements even at nine o'clock. A vague suggestion of menace and 'who are you looking at?' hung in the air. Is it me that's changed or Northampton. A bit of both, probably.

But let's hear it for the sunshine. Clear blue skies today, every bird busy and singing its heart out, blossom to the maximum. Since I was last walking in Overstone, the builders have moved in. Readers will think I'm making this up to ride a familiar hobby horse, but we only noticed a few months ago how the fields towards Moulton are being gouged out by earth-movers. A large new housing estate is to be constructed there, with little infrastructural provision as far as can be seen, except that the A43 is to be dualled close by. That apart, the roads, the schools, the health services - they'll all just have to cope. It was announced back in 2014 apparently - but we didn't know, of course we didn't, because Northampton no longer has a daily paper, and we choose not to listen to local radio. The problem is there's always something useful among the junk in your inbox.

Overstone and Sywell run seamlessly the one into the other. There's Overstone Heights in Sywell, and I've just parked off Sywell Road, Overstone. I buy a copy of The Times in the village Post Office.  Mr. Murdoch's proxies are discussing pruriently the prospects of the US and Russia going to war, but that all feels a million miles away as I walk east along the straight road up to Pie Corner, a little close of modern houses next to Sywell's pub. I can find nothing to tell me why it was so named, unless the hostelry was (still is?) renowned for its steak and ale. The only reference I can find on the web has Big Ade, whoever he is, tell the world he thinks he'd fit in well there. A stile takes me into a lumpy field. I walk down to a dried stream bed and then up to the church of St. Peter and St. Paul. The handsome cottages to the far side of the church look like estate houses, sturdily and prettily built in an artsy and crafty Edwardian way.

The rapeseed is brilliantly in bloom in the fields. At first the path to Mears Ashby neatly cuts a broad swathe through the sea of yellow, but where it pulls up the other side of another little valley, it's narrower and I'm pushing through plants that are as tall as me and slightly damp on my shorts and bare legs.  It's dustily dry underfoot now. Too much more of this nice weather and the water companies will be crying drought. Perhaps I could have gone back to my Merrills today.

I would have said I knew Mears Ashby - we pass close to it weekly - but I find I don't. It's a severely square shape on the map, which if we were in France might suggest fortifications, but this is Northamptonshire and such things don't exist here. Inside the square there's another dip to the next stream on its way down to the Nene, and a little nest of roads with many distinguished houses representing a number of moments from the last four hundred years or so. A couple are up for sale and I talk to Maria from Jackson Stops, who's just been showing prospective clients around a little cottage. Too small for us, I say, but she smiles a charming smile and presses a business card upon me - Jackson Stops were the agency who negotiated our current house. All Saints church hangs solidly above a flowery ravine with a pond at its bottom. On the far side is the large Manor House. I stop and honour the name of Callis on some of the gravestones.  I was at college with Charles Callis from this local farming family. His brother Richard and wife Veronica worship at our St. Peter's.

I ignore the path which runs northwards from the village, fearing more wet rapeseed, and go by road instead, because I want to drop into the Beckworth Emporium for a drink and the loo. Beckworth is a tremendously successful business attracting hundreds of people every weekend (and many weekdays too) to its garden centre, café and fine foods shop. The staff are unfailingly pleasant and helpful, the ambience cheery and at Christmas you can watch the skating and buy a reliable well-priced, needle-fast tree. It's a regular breakfast treat for us. It does the simple things very well, and so has flourished. And after that endorsement, I'll expect 10% off all future transactions. The downside of my call on them today is a dodgy walk along the back road to Wellingborough, and I have to take conservative care, stepping into the ditch when in doubt until I can pick up the streamside bridleway to Hardwick. 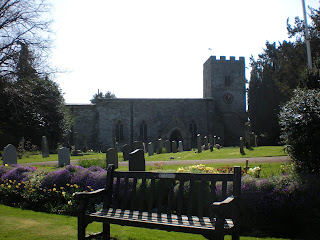 Hardwick is the sort of nominal village equivalent of the Smith family name. You can find Hardwicks all over the shop. This one is a small collection of houses and farms around St. Leonard's church, with a postage stamp green and one tree. It was probably always a tiny settlement. Wikipedia tells me that there's an additional shade of meaning to wic  of which I was unaware: a village so named was dependent on another community close by - in this case I suppose probably Mears Ashby, although the expanding girth of Wellingborough creeps closer year on year. A youngish man is testing out a pushbike for his wife, who arrives back from work while he's doing so. They play with their pretty little, laughing pre-school daughter. I wonder if they ever have anything to do with the beautifully tended church. Perhaps they cut the grass. There's a notice in the porch to say that the benefice has been suspended. One reason that this might have happened, though not the only one, is that one of the churches in it may have been unable to pay its way. They still have a priest-in-charge though, Duncan Beet, but he's on his way elsewhere, so from now on there's an interregnum. I wonder what will this do for the churches of Overstone, Sywell, Mears Ashby and Hardwick? People can grow - in the modern parlance 'step up' - at such times, or they can decide to jack it in and go somewhere else, or nowhere at all. We are a supermarket culture, or so we're told, and the church is competing for trade. Is that right?

The lane takes a right angle in the village, and I walk up it towards the woods trying to ignore the lacework of litter beside it. Near Grange Farm two Transit vans pass me. There are three up front in the first and a single bloke driving the second. This is no statement of his marital status: there is just one of him! The gate to the farm is opened and they go on down the track towards it. They don't look right to me. Looking at the livestock around me, I think, 'Sheep rustlers?'

Generally speaking, compared with the west of the county, there are few footpaths around here. Why is that? I suppose the communities may be slightly more scattered, and in times past the population may just have been smaller. Or maybe rascally landowners shut them down long ago. Or maybe it's something to do with field use. Or perhaps wartime experience - airfields and so on - changed necessary permissions. It means more road walking for me, but round the back of the farm there are bridleways, a bit knobbly now that the ground has dried out. And horses obviously exercise on them regularly, because at one point I come to a little series of well-organised jumps. From the west side of the wood I can hear the sounds of shooting and I recollect that I've seen directions to a range off the A43 to Kettering. The fields are full of sheep, with winsome, just-past-gambolling lambs. It's hopeless trying to get pictures: I could be there all day. As soon as the camera comes out, the mummy sheep herd their little ones out of the way in a way that's truly very endearing. No human mother could be more protective.

Then I hear loud voices over the fields and raucous, revving engines. I can see the two Transits again, over to my left. Evidently not rustlers then. The blokes are standing, admiring trials bikes which have exited the rear doors of the vans. Soon they're racing them around a field very close to the sheep. I look for a verifiable phone number for the farm, but can't find one, and so have to leave them to traumatise the animals. Are they doing this with the farmer's connivance, or illegally. I don't know but I find it peculiarly distressing. 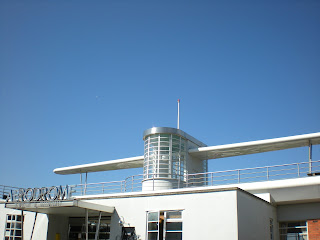 Up past the solar farm, I come back to the road near Beckworth, and walk back towards the car past Sywell Aerodrome, winner of several awards for being the best UK 'General Aviation airfield'. I have a drink at the bar of their fashionably Art Deco hotel, and study the clientele hanging out to watch the planes take off and land on the grass strip. It's a jolly place on a regular Saturday afternoon (there's no special event today, though next week their little aviation museum will re-open with a bit of formation flying, re-enactors and weather permitting, 'the appearance of a friendly war bird or two'). On this day before Palm Sunday, in this slightly Palm Court setting (no band though: just cheesy pop on the stereo), I reflect that there are as many people sitting in the sun as there will be in church tomorrow morning. Are we so much less attractive than this as a place to be?

Father
Walking in the Sunshine of Your Love today
I found it hard going.
Everywhere looked
(here we go with the cliché )
'achingly beautiful'.
Pain in my heart, you see,
And fatigue in my muscles.
I was thinking about Trevor,
Whose life we'll celebrate on Wednesday,
Returned to heaven so early.
And these things I report:
All so transient.
The life of those lambs:
So short.
I ask you again to help me understand this,
And to accept all that we have
So fleetingly
As precious gifts from You to us
And to find a proper response
To Your kindness and generosity.
Amen