Who knows where the time goes?

As I'm driving just past Trafford Bridge a white van's coming towards me at speed. I take avoiding action. There's an almighty thump from the front near side as the Polo's wheel drops into a chasmatic pothole. I swear and nurse our little car the last couple of miles into Chipping Warden, lest the suspension be warped or broken, but the VW's German technology seems to have survived intact. Country roads whether in West Virginia or West Northamptonshire are under stress these days. I expect they receive as much attention as they ever did i.e. about once every fifty years, but they were never intended to take the weight of HGVs or today's farming behemoths.

It's a rude shock emerging from the Polo into today's bright sunshine. The breeze from the north west is keen and chilly. I'm glad to have three layers to put on. Autumn really has arrived. Most of the way to Aston le Walls I'm walking round what's left of the perimeter road for the defunct Chipping Warden airfield. In its Second War heyday this must have been a state-of-the-art facility with its concrete runways and spread of buildings. All gone now, of course. There's an industrial estate to the south side, and where I am to the north arable farming has returned. They flew Ansons and Wellingtons here in wartime, and there were a number of fatal crashes, including the one I mentioned in the previous post. Another Wellington hit the roof of the Manor at Boddington, killing some of the house's occupants as well as the crew. Perhaps close proximity to the village of Chipping Warden was one reason why the airfield was never promoted to post-war duty, and so abandoned after service as a communications station.

Some days it's impossible to avoid the day's news as one walks. Unwanted images and anxious thoughts about events rattle round the head obsessively. The old catchphrase 'What happens in Vegas, stays in Vegas...' (too frequently adapted to other situations e.g. 'What happens on tour...' ) manifestly isn't true now. The place is almost a suburb of Woking or Todmorden. When asked, a large percentage of Pointless quiz contestants will say that if they win the jackpot they'll spend it on a trip to Nevada. Even the Crosses have been there (although not to gamble, he said hurriedly, just to see the gondolas and the Chihuly glass...) and wasn't that a very strange, disorienting experience. Thankfully we were only disconcerted by the heat, wind and dust but the questions raised by this week's appalling massacre at the Mandalay aren't just for Americans and aren't just about gun control. 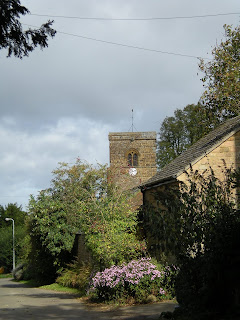 A universe away from Vegas, Aston le Walls is a pretty place. There are two churches. In addition to St. Leonard's, there's the very perky looking Catholic chapel of the Sacred Heart and Our Lady, which has a particularly attractive mezzanine for coffee and chat. I visit both places of worship, and hope that their clergy and people get on: it's a small village. It interests me to wonder how far widespread the Catholic congregation is - but from the nameboard of incumbents I can see that a John Gother, the first priest, was appointed here in 1688, so at any rate there's a long tradition. Invoking the 'persistence principle', perhaps there's still an above average number of Catholic families in the neighbourhood. Even in Tudor times recusancy flourished where the roads were bad. The newsletter for Sacred Heart has Father James, the current priest, explaining that he's slowly recovering from a prolonged and distressing loss of voice (all very New Testament, thinking of what happened to John the Baptist's dad - though I'm not suggesting any lack of faith on Father James' part!) 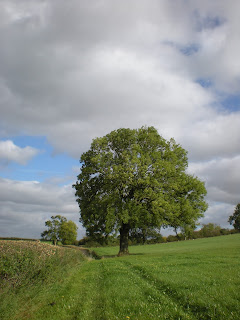 The walk from Aston to Byfield along a verdant lane sometimes more, sometimes less distinct as it runs in the lee of the ridge, is sheer joy on a cheerfully sunny day, the path inhabited by what ee cummings called the 'leaping greenly spirits of trees' and 'the blue true dream of sky'. Bouncing over the grass at a good pace, I notice what I've experienced before: what I assume to be a reduced flow of oxygen to the brain alters my state of consciousness. Ideas, thoughts, fragment of tunes become more diffuse, less translatable into words. And so, with Father James' difficulty fresh in my mind, I start to think about the mysterious phenomenon of glossolalia - speaking in tongues. It feels to me, in this blissed moment of one-ness with nature, as if the reason more of us don't experience this 'gift of the Spirit', is the internal inhibition I'm detecting now. In the ecstatic, beyond-words grip of the moment I feel a tightness in my throat as I strive to reach for a different expression of joy and praise. But me, I can never pivot beyond that self-revealing point of release, even when I'm out here alone. My loss? I don't know, because I've been in congregations where a lot has been made to hang from the necessity of speaking in tongues as a test of true spirituality, or of even being a real fully paid up Christian, and I don't buy that idea for one moment. But I think the role of our voices' use in worship is a deep, multi-faceted subject, and it's something I could think about more. Is the phenomenon of glossolalia supernatural at all? Is it even distinctively Christian? 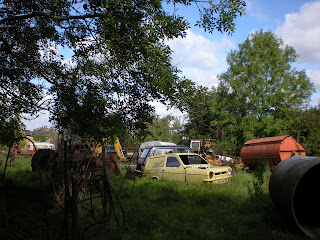 Holy Cross in Byfield seems to be in what one might call that village's 'Sports Quarter' (for those living outside Northampton, you need to know that our town is blessed with a 'cultural quarter' and a 'shoe quarter'. For all I know there may be a 'slum quarter' and a 'get-bladdered' quarter too. It's just that they haven't put up the signs. I pass Byfield's very swanky tennis club, cross the grass between the football and cricket facilities, and then up on the rise I glimpse the high and handsome spire of the church hidden among trees. Byfield is a larger than average place - its population tops a thousand - and the church's size reflects the ambition. I don't particularly enjoy the pub where my GB is served with a positive scowl. The Lounge Bar's two other occupants are middle-aged ladies, one of whom is maybe a district nurse. They're discussing a daughter's new tattoo with approval - as long as it's only one, mind.

Byfield was for some years the home of the late Sandy Denny, whose utterly individual voice pinned me to the wall when I first heard her sing 'Tam Lin' with Fairport Convention on the Prefects' Room radio some time in '69. The band were experimenting by putting British folk songs into an electric context. Bob Dylan had done the same thing for Americana to cries of 'Judas' from his hardcore post-Woody Guthrie audiences. There were some who felt the same sense of betrayal about adding Gibson 335, electric fiddle and drums to songs like 'Matty Groves' or 'She moves through the fair'. I didn't of course, because I was only 18 and although I knew some of the repertoire it was from Benjamin Britten and Peter Pears performing it, and not from being down the local folk club. If you've never knowingly listened to Sandy Denny, I urge you to find the Fairport recording of her own song 'Who knows where the time goes?'  It's intimate, tender, achingly beautiful, and so sad, because now we know of her tragic, early and accidental death. I saw her sing live only once, at the Albert Hall, when her later band Fotheringay were supported by Elton John, gold painted boots and all, in the first years of his illustrious career. Elton, Reg, the support act! 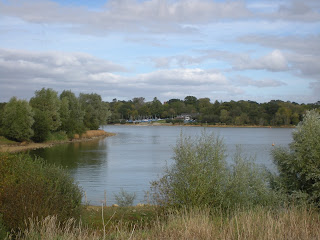 When a fingerpost for a footpath tells you where you're going, it's a good sign (ha-ha!) I drop down the hill, skirt round the cows munching peacefully in my way, and come up to Boddington reservoir through a spinney near Byfield Pool. I never knew there was a large stretch of water here, but it's lovely. Sufficiently big that there's a flourishing sailing club, but remote enough for me to disturb a lot of bird life on the far side. Two cormorants flap away, struggling to make height, their shape resembling SR-71 spy-planes - which were indeed generically named 'Blackbirds'. A family of jays squawk noisily from the path in front of me: these days I don't see many of these gaudy birds when I'm out and about. A huge grey heron rises majestically to find a new fishing pitch in the marsh. A pheasant whirrs away in panic from the other side of a hedge. As it takes off it makes a reverberating sound like one of Richard Greene's Robin Hood arrows thwacking into a straw target. As I climb the hill a red-sweatered jogger with his dog crosses in front of me. I see him again a mile further on. I suspect he's probably gone three times as far as I have in that time, as I sweat up towards the balcony road to Upper Boddington, treading the verge of Oxfordshire, 'anxious fears subsiding'.

The common cormorant (or shag)
Lays eggs inside a paper bag
The reason you will see no doubt
Is to keep the lightning out.

I never knew this was written by Christopher Isherwood. It gives a quite different slant to his black polo-neck, Berlin avant-garde image. We sang a version of it at primary school, and its quirky humour has been an influence on my children's songs, for good or ill.

A mentally challenged Friesian (I said Friesian not Franciscan !) bellows at me and lifts its head aggressively as I slip into the churchyard of St. John the Baptist, Boddington by the back way. It's a church which is taking God's creation very seriously; the parishioners have noted in great detail the flora and fauna seen around the church grounds. They've taken their meticulous recording one step further when it comes to the graves. A bound booklet of a hundred or so pages of A4 takes the curious visitor through each and every burial. As Richie Benaud would have said in a different context: 'Good effort!'

Coming down off the ridge it's a long walk along the valley before I turn uphill again to the messy agglomeration of buildings at Appletree, once a much larger medieval settlement. Part of the route follows the line of the Millennium Way, also encountered in the last couple of posts. It's sketchily marked, and never won sufficient hearts and minds, I think. Good ideas and innovations in the leisure countryside need ongoing support or they wither, be they pocket parks, cutesey wooden exercise trails or full-blown 'long distance' footpaths. This is a sad feature of routes like the 'London Loop' where one often finds local council enthusiasms discontinued under a subsequent regime and left unloved,  ruined by a plague of vandalism.

Just past Appletree, a Jensen Interceptor, automatic version, purrs past me. A strange design, I've always thought, with all that rear-end weight pulling the bonnet up towards the sky. And unless you have your own personal mechanic, how do you get such a classic serviced? I have enough trouble with the Audi/VW!

Great Father of us all

I pray for a melting of hearts;
A freedom from fear;
A recognition that strength comes from within
And not from any weapons we carry.
I pray for those who use guns professionally
To protect people
At home and abroad.
I pray for victims of gun violence
That against the odds
They may find it possible to forgive.

Take from us all
Including me
The fantasies of revenge we rehearse
The hatred of difference we harbour.

I ask these things
In the name of the Prince of Peace,
Jesus our Lord,
Amen.