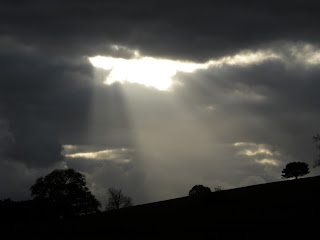 I puff up the hill away from Woodford Halse and ponder whether it's a good thing or not to begin a walk with the longest and steepest climb of the day. Anyway, I'm making a fuss. The valley floors in the Northamptonshire Uplands lie at about 125 metres, and the tops are at about 190, so that's only a rise of about two hundred feet. The very highest point in the county (as we were reminded the other day in a Parish Quiz) is a few miles away at Arbury Hill - 225 metres, 738 feet. A Wikipedia article I read just before writing my previous post said of Blakesley that its altitude is 1400 feet, which just goes to show. Don't trust what you read in Wikipedia articles. 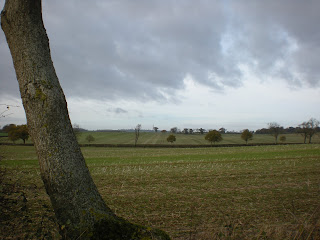 Hellidon in the distance - but you'll need a magnifying glass.

I pass the happily situated Woodford Hill Farm and turn down the narrow metalled lane towards Preston Capes, before detouring on mud and grass to approach the village opposite the pretty descent of the High Street. The year's last roses are dead heads now, courtesy of the first country frosts of the season. A solitary bee makes a final forage as the sun breaks out to lend soft brilliance to the honey stone of the cottages. Norman St. John-Stevas, Lord St. John of Fawsley, lived with his partner in the Old Rectory beside St. Peter and St. Paul's. There's a grey carved memorial stone to the two of them overlooking the valley beyond, just next to the one for Sir Norman's mother, Kitty. I'm somewhat moved. I never met him but he seemed a man full of life, a regular on radio as well as a force in Parliament, an eccentric, a historian, an authority on the law as it pertained to the monarchy, smart and patrician. He was often very funny about Margaret Thatcher, christening her the 'Blessed Margaret' at the time when she brooked no opposition from without or within. At his hands she also acquired the soubriquets 'Tina' (There Is No Alternative) and 'The Leaderene'. Unsurprisingly, despite his many and great talents, he didn't last too long in her cabinet. She tolerated him as Leader of the Commons before he retired to the Lords in 1987. I'm struggling to think of contemporary politicians who make me smile so much. I suppose Johnson has the potential, but usually it's too much like a car crash, as evidenced by his mishandling of the case of Iranian detainee Nazanin Zaghari-Ratcliffe during the last week. Sir Norman was explicitly a Christian. I've always associated him with Catholicism, but perhaps he was an English Catholic for whom the continuity of the Faith was more important than partisan identity with a denomination. I cannot think of a more perfect setting for a country seat than the church and rectory at Preston Capes 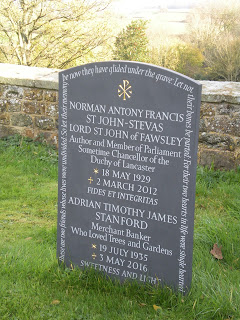 These are two friends whose lives were undivided
So let their memory be now that they have glided
Under the grave. Let not their bones be parted.
For their two hearts in life were single-hearted.


The winter crops are just greening the fields. I clamber over a loamy hillside and descend to the sheep pastures which surround the lonely church at Fawsley. Sue and I used to escape here when we were young teachers, to give ourselves an occasional Sunday afternoon holiday from the exacting routines of comprehensive education. Back then the Hall was a sprawling ruin around which the wind cried Heathcliff (to merge Kate Bush and Jimi Hendrix). We vaguely used to wonder how the money could be put together to turn the place into an Arts Centre for the county's young people, and wished we had the odd half million to invest. I suspect it would have taken a figure twenty times as large to do the job. It's now an expensive hotel in the middle of perhaps the loveliest landscape in Northamptonshire. As I walk round to the front door of St. Mary's, two ladies meet me coming the opposite way holding what I at first think are baskets of decorations, I assume perhaps for a forthcoming wedding. Jo is from Everdon Field Studies Centre. She's shortly expecting twenty nine Year 4s from Middleton Cheney who are out for a long walk with some birdwatching and church studying thrown in. The baskets actually contain house shoes so that the kids won't totally mess up the church floor. Inside St. Mary's everything is very different to what I remember. The church furniture and the tombs to the Knightley family are all very spruced-up, clear and clean. I say so to Jo, who remarks that the wedding income, given the proximity of the Hotel and Spa (and not much else: there are no domestic houses here) has probably made a big difference to the way the church looks.

What price does one put on a day out for kids like this? How would you successfully evaluate such a thing? - though someone will certainly have to. When you consider the hassle it causes in terms of risk assessment and logistics, you'd have to wonder why teachers still do it - except that in one of the ironies of contemporary education it's of course compulsory that such experiences are offered. Yippee that it's still recognised such moments have the potential to be life-changing. Sir Norman, with his successive briefs for Education and The Arts, would have approved. Let's hope no Singaporean or Korean models of education ever prevail such that this extramurality is deemed too expensive or superfluous to needs.

Notice to non-religious readers. Feel free to skip the next para. I'm off on one...

And you, the Church, what do you think? Are you personally satisfied that we're often only of interest (completely justified interest) as a series of ancient monuments? How do we connect what the kids see at Fawsley - tombs, brasses, dudes in chain mail, altars, baroque organs - with notions like service, sacrifice, the love of God, the community of faith? Are C. of E. schools there to offer a selfless, mute service to the underprivileged kids of Britain, or to proclaim Christ crucified to a Godless nation? To put it another way, should our National Church's logo be a cupcake or a cross? Sue and I were joking this morning that in the way utility companies were sometimes re-branded during the noughties, perhaps the C. of E. should restyle itself 'CAKE' to properly mirror its more usual current public-facing self. Cake's what we seem to offer more than we offer salvation. Discuss. 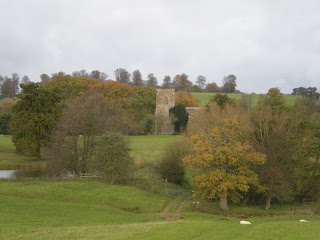 Are we all back together and sitting comfortably? Good, then I'll resume and briefly turn into Trip Advisor. After Fawsley Hall re-opened as a hotel, we ate there a couple of times, and sadly neither was memorable for the right reasons. The first time round something must have gone Pete Tong with the stock, and the onion soup tasted like nothing before or since. Bad, but no Donald, Really, Really Bad. The second visit, after an interim of many years, was a celebration afternoon tea. When we finally got to the cakes and petits fours, they were OK, but, my dear, the other guests... I'm sure things are different now. But apparently the 'art' on the walls remains horribly the same.

Up the road past the Hall, with one of the lakes to the right, I pass what is marked on the map as 'Little Fawsley', a huge barn of a place shouting for renovation. Smoke rises from a chimney so someone's living there. I turn onto a bridleway where there's a sign to the 'Granary Hotel' and 'Tea Room'. I think to myself: 'Thursday in November?  It'll never be open at lunchtime!' but it is, and I get myself served Earl Grey and delicious scones. There are two other diners. We get talking about local history. They clearly know Northampton well, and we chat about St. Peter's Marefair and the town's Saxon origins. One of the two chaps is a landscaper and he knows Roger and Muriel Clarke - fellow-worshippers and friends at Weston Favell. The other slightly younger guy seems to be the one commissioning the landscaping. It's only when they're about to leave, and the latter has just shown me a lovely, ancient, glassed map of the Fawsley estate which he's produced from somewhere on the first floor above the café, that it becomes apparent this is Ben Gage, heir of the entire Fawsley shebang (though not the Hotel). I rapidly review our last fifteen minutes conversation to see if I've said anything rude, but think I'm OK. Ben is obviously a very nice chap and one with a task and a half on his hands. The Dower House, formerly derelict, has recently been restored. There are plans to make flats of 'Little Fawsley', but finance will have to be found. Firmness of purpose, boundless energy and a selective eye for enterprise must be daily requirements. Ben asks if I'm going to visit the church at Charwelton, and I say I am. He tells me I'll need to knock on the door of the stately farmhouse in order to get a key, but as it turns out there are other visitors there before me when I arrive.

It's a day for romantic, film-set, Austen/Bronte churches. Charwelton with its ancient packhorse bridge on the A361 Daventry road hasn't one of its own. Church Charwelton is more than half a mile way across the fields, near the lumpy bumpy nineteenth century railway spoil heaps along the route of the Jurassic Way. I find that if I were free on Christmas Eve, I could get myself a gig: they have no organist for the Midnight Mass. They have an electronic organ to which can be attached one of those gizmos which allow the operator to pick a tune, any tune, and deliver it for congregational accompaniment. However, last time out the system failed to work, so the little knot of people now assembled is hoping to find a solution. Which, judging by the Sounds of the Wurlitzer I hear a few minutes later while I'm sitting on the bench outside, they have. Christmas Eve is safe in the hands of the computer. It's better than nowt. But I think to myself how magical a midnight winter service could be here in this pluperfect setting, with a hard frost on the fields, a crystalline sky, and a few snowflakes falling as we emerge to embrace and welcome the Christ-child once again. It's quite tempting. 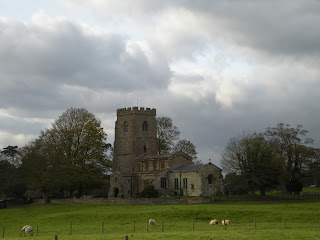 Lord
I think
That if not for the final sacrifice of so many
And a few miracles from You
I would not today be able to walk where I please
Or write what I think
Or worship freely with my family and friends.
I thank them.
And I thank You.
Amen.