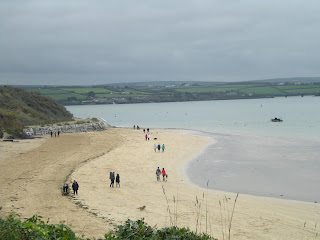 I think you can probably tell we're not in Northamptonshire this week....

The ferry that takes us from Padstow across the Camel estuary to the straggly village of Rock is built like a mini WW2 landing craft with a cabin stuck on the rear end, a roll on-roll off for pedestrian tourists who've eaten too much at one of Rick Stein's many foodie outlets. I don't much care for watery excursions, but on a bright and shining October day, I like this a lot.

From the slipway we walk along the curving beach and then clamber into the dunes, but can't see the path we want near the pretty house where the mounds of sand and grass briefly become proper cliffs at Brea Hill. We ask the way of two teenage girls, apparently straight off the Doc Martin set, though evidently less dippy than their TV counterparts. They suggest we follow them if we don't want to try the steep descent on the far side of the Hill, but they're too fleet of foot; in a very few moments they've left our careful treading of the narrow path well behind. At Daymer Bay, Gresham School Holt's First Fifteen are improving their fitness by enthusiastically running up and down the dunes. An Israeli once told me that's how their defence forces train too, although I expect they do it in 37 rather than 17 degree heat.

After a false start we find the right track up towards the golf course, and there's the church with its odd stumpy little steeple, nestled down among the undulations, St. Enodoc's, the talisman of John Betjeman's childhood and his final resting place. His mum's buried there too, and there's a memorial to his father on the south wall, the plate spelling the family name with the extra terminal 'n' which they later discarded to protect themselves as the twentieth century became politically complicated.

I love Betjeman's writing and his melancholic delivery to camera in those period piece documentaries, all now so anachronistic, the rhyming patterns and the slow, careful pace. I read 'Summoned By Bells' when I was eleven years old, and still think it a masterpiece. He searched for faith to the end, pushing his way through obscuring curtains of doubt, sustained by the beauty of the natural world, and God's gifts of creativity to humanity in word and physical form. Much is made of the quality of light down the coast at St. Ives, where artists past and present gather, but it's pretty special around the Camel Estuary too, as the sun-coloured sand surfaces into a caerulean sea and the foamy Dulux surf, a far cry from Metroland and Northampton.

There's nothing within fifty miles of the Nene much like St. Enodoc's tiny church with its low-vaulted roof and offset bell tower. There was a fishing village here once, and the church guide book tells us there's a tradition that where a Cornish church has a spire, it's built on a heathen burial ground. But eventually the shifting sands couldn't be denied, and the church had to be rescued from them in the nineteenth century. At one time, the vicar had to gain entry by a trap door set in the roof. A friend tells me that according to the archaeologists, a Roman settlement in Alderney was abandoned for similar reasons.

Impermanence is built into history. Physics tells us so. We Christians assert the unchanging-ness of God as a comforting antidote (tho' why do we believe this, rather than a God who is master of flux?) because I suppose 'change and decay in all around (we) see...'  The loss of any current circumstance is disconcerting, reminding us of our mortality and impending loss of faculty and agency. Is the Brexit phenomenon a secular by-product of these fears?

St. Enodoc's antecedents are obscure. It seems he may have been a son of the Welsh king who gave his name to Breconshire. In the times before Aelfred, England (let alone the 'United Kingdom') was a collection of warring states and tribes between whom conflict was probably endemic. The following view will seem extreme and dubious to many readers, but I sometimes think Brexiteers may be unwittingly pushing us towards an analogous contemporary situation rather than (as they would have us think) re-establishing a single nation standing proudly in resistance to alien cultures.

The most permanent feature of life I'm capable of grasping, is the requirement on all humans to yield to the law of love as best described by Jesus of Nazareth. In my limited slice of space/time, that's quite enough of a challenge.

We pull ourselves away, and avoiding the golfers who co-exist uneasily with the rights of way winding across their fairways, stroll back to The Mariners in Rock for ginger beers and shandies. In one corner hangs a telly with coverage of a 20/20 cricket match from the Indian Premier League. In the other an identical screen gives us Charlton v. Millwall. Mysterious Cornwall always was a place unto itself, but these days you can't keep the world out. What role is there for sport in drawing Britain (and the World) together politically? Or for the Church of England? 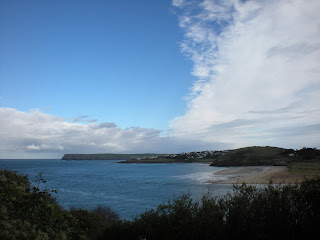 This is possibly my favourite walk of all, a hug from a long-absent, much loved friend.

The road from Wadebridge towards Padstow, busy, walled and narrow, drops into a ravine at Little Petherick. On the one side of the stream lies the Village Hall and the dark church of St. Petroc Minor. On the other is the lovely house where once upon several times we happily holidayed. We park by the hall. A Zumba class is grinding away as we don boots and anoraks. Sweaty bodies are on show through the open door. The tides are a consideration for this walk. The Wadebridge side of the path along the creek can be impassable at the highest tides: there's always a little squelchiness even when the water's low. Through the five bar gate, cows used to graze the grassy bank on the right, but it doesn't look as if they've been there in a while. We skirt the fields and then come to a wood and stone stile by the plantation we remember from its very early days. Now there's dense undergrowth and the trees are pleasingly mature. The path drops down to the margin of the creek, and we look across the ripples of chocolatey mud, glistening in the sun, to the slit trench of grey water. A single snowy-white egret hears us and takes flight to a new pitch further down. There's not a sound apart from the wind and the calls of the wading birds, their plangent cries bouncing off the wooded hillside. By Seamills the slow reveal of the creek's exit into the Camel Estuary becomes complete, broken only by the arches of the old railway line. We round the low shale cliff with its ancient iron moorings and enjoy again the low slung Georgian houses with their splendid views to the sparkling open water beyond. We speculate again as to whether we'd buy one, if we had the money. Too vulnerable to flooding for someone as cautious as me! Further round is a more modern house where a wooden causeway crosses a little bay. It's being further updated with one of those glass fronted balconies which are so fashionable at present. The workmen whistle along to Radio 2: they're enjoying their labour in such a beautiful setting and under such gorgeous weather: it'll all be done and dusted in a couple of weeks. We climb through the field to Tregonce, and then drop down to the cyclists' and walkers' 'Camel Trail', which follows the old branch line. What romance it must have been to decant from the London train at Wadebridge, and puff along the seven miles of single track to the terminus next to the harbour, almost in the heart of Padstow. Real Famous Five stuff! B&B for the more budgetarily constrained, The Metropole for the toffs. Some of the station buildings survive, but now just there, opposite the Lobster Hatchery, it's car park city, though amongst a plethora of foodie delights, The Metropole's still available for cocktails if you've got the yen and the cash. 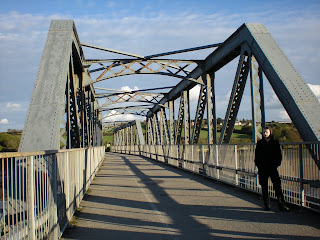 Up in town is the gracious parish church, like Petherick's dedicated to St. Petroc - the town's name is derived from him too: 'Petroc-stow'. He founded a monastery here in the sixth century, and a second one in Bodmin, and has come to be seen as one of Cornwall's patron saints, although he seems to have wandered across a selection of 'Celtic' lands during the course of his life. From the accommodating harbour at Padstow, a long distance footpath known as 'The Saints Way' lollops across the peninsula to Fowey in the south. It marks a convenience of ancient days in avoiding the extra sea miles round Land's End for travellers perhaps en route from Ireland or Wales to Brittany, and we follow it down the lane out of town and up steep Dennis Hill to the Victorian Jubilee obelisk which overlooks the Camel Estuary, the creek and the exit to the sea, flanked by the sharp, dramatic line of Pentire beyond Polzeath. For me it's a place of pilgrimage in its own right.

The Saints Way switch-backs from there onwards along field margins, across causeways, through ancient woods, with views of the creek, now from ground level, now from the balcony of the path, and finally descends to the car park at Little Petherick again. I once found a fatally wounded crow at its highest point, and could do nothing for the poor bird, but commemorate it in a sad chorus. The beauty of places like this can make the heart sing or reduce one to tears, and which will happen on any given day, it's impossible to know. 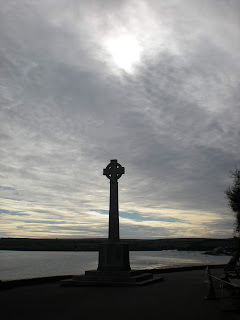 Lord
In a world shot full of tragedy and pain
In the presence of such unutterable wonders
I find myself saying
As I have said before
'It can never be so good again'.
Thank you
For times of holiday and recreation.
Help me feed off this experience
To tackle the rest of life
With courage and creativity.
Amen.
Posted by Vince Cross at 07:07