I found myself in a bad dream last night and woke up sweating just after two. In these cases does the sleeping self decide to opt out of running a particular film, much as one switches off the telly when there's e.g. one too many grisly shot of the pathologist at work in a shock-horror movie? And how exactly do such dreaming experiences integrate the self, as psychologists intimate they do, if they're so scary? Both malign, pursuing protagonists in this instance were old friends, neither known to the other in real life. Both would undoubtedly be horrified to know the roles in which my mind had cast them during my personal psycho-drama. Of course it's an unsettling thought that one might feature similarly in the dreams of others: until this moment, that had genuinely never occurred to me!

In any event, it settled my procrastinating determination to walk today and make the most of the sunshine. I leave Raunds travelling east with, unusually, only one objective in mind. Hargrave is a small village on the edge of Huntingdonshire, just off the road to St. Neots. Like Raunds and Stanwick, it's a parish in the 'Four Spires Benefice', but it's stuck out on something of a limb. 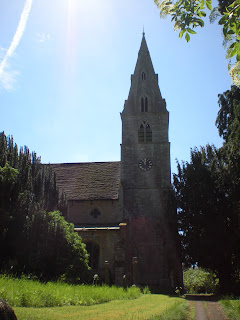 
These days Huntingdonshire is a non-metropolitan district of Cambridgeshire, not a county, but maybe in the meaning of 'Raunds' there's a folk memory; the very name of the town means 'boundaries'. I suppose it's possible the markers to which it refers may go back even further. Where exactly was the border between the Catuvellauni and the Iceni in pre-Roman times? Or nearly a millennium later, between Mercia and East Anglia? I daresay there was hinterland and dispute. Strangely this lack of certainty extends to Northampton even today. It's always struck us as anomalous that we're stuck with Anglia TV: Man falls off bicycle in Beccles. Arguably Northampton looks more to the west and the north than the east for all that the Diocese of Peterborough extends its reach right down to Cotswold-facing Aynho. For whatever reason, to the east of Raunds the villages are more widely spread, the roads a little more like those of the fens, resembling a grid. It's a different kind of land. Just a mile from Hargrave Huntingdonshire reaches its highest point at the Three Shires Stone - a measly 263 feet. Apart from the Isle of Ely and the Holland district of Lincolnshire, Huntingdonshire's maximum height is the lowest of any county. And that includes Norfolk and Cambridgeshire!

Oh, the pure and atavistic joy of the first mile's walking in May! Birds are carolling from every tree and bush, with blackbirds the loudest and most expansively tuneful against the fluting ostinato alto voices of the wood pigeons. A distant cockerel is parading himself and the wind's a gentle zephyr. The far away scrapings of an industrial digger add a Charles Ives element to the symphony. Up the gently rising gradient to Mere Farm, I'm unreasonably pleased with myself as I spot the moment the path dodges from one side of a hedge to the other. My internal soundtrack is selected highlights from yesterday's concert in Abington church. It's always interesting to see which things stick and loop around the head when you've been working on them. We sang Parry's 'I was glad' so of course that's in there, as annoyingly are bits of the Cantique de Jean Racine: a piece of which I heartily disapprove because of its cloying sentimentality, quite unlike the uncompromising, steely darkness of the same composer's Requiem. But the novelty of yesterday's gig was Bizet's Te Deum, hitherto unknown not only to me I suspect, but probably all the other singers too. It's an enthusiasm of Tim Dolan, Abington's Director of Music, and I can see why. It's a slightly crazed mash-up of martial tunes and gothic diminished chords written when Bizet was still in his teens. The work was given a firm thumbs-down by the musical establishment of the time. It's as if young Georges had to get down in a single piece every musical idea he'd had that year. Some of the individual parts are good, which is why they still function as 'ear-worms' but taken as a whole, my provisional judgement is that the piece is a car crash, though weirdly huge fun. It could of course have been the reason for my subsequent nightmare... 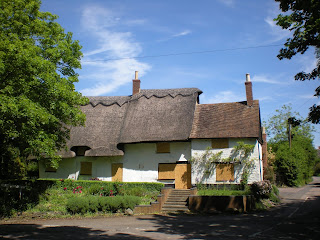 The church of All Hallows, Hargrave sits in the middle of a small village whose population numbers no more than 250. There's a Top Farm and a Bottom Farm, and a sad failed pub in a boarded up, Grade 2 listed building, the Nags Head, whose fate at the time of writing is yet to be decided, but which surely has no future as a hostelry, unless on a remote off-chance the community were to decide to run it as a project. I sit in the sun-dappled churchyard and think about the future of the inn as compared to the church. Hargrave is in one sense quite isolated, which is part of its charm. The limited support All Hallows can garner, the relatively small income it can generate for the wider Church means that as things are it can only merit inclusion in a benefice like Four Spires rather than standing on its own feet. And yet, the Church (capital C) is very aware of the challenges posed by the likely housing expansion - not on Hargrave's doorstep to be sure, but not so very far away by road. What's the logic here? Can we envisage a church like All Hallows finding something special, distinctive and different liturgically, and offering it to the public so that there'd be the possibility or likelihood of new walk-up to its ancient doors. Surely we don't want this beautiful little place of worship, with parish history stretching back to the Domesday Book, to go to the knacker's yard along with the Nags Head? Churches exclusively for the young. Churches exclusively for the old. Churches designed and stripped for social action. Churches devoted to contemplation. Churches representing the best of every liturgical tradition and none. How could benefices plan to strategically diversify their product? Here I am, Lord. it is I Lord...

It would mean the sacrifice of personal preference in many instances. But what's the alternative? Niche  and genre are important modern words, even if neither is very English. 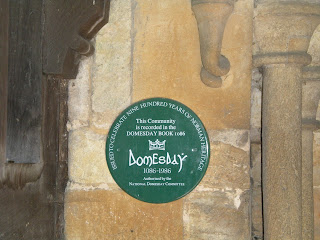 I walk the long, roundabout way back to Raunds under a hot sun through alternate fields of rising grassy wheat and rapeseed - which is now turning olive green and just beginning to hint at its cabbag-ey finale. There are paths flanked by luxurious bridal trains of creamy-white cow parsley, and I skirt a lovely resonant wood. The views are long and shimmering. At one point I push through an overgrown field entrance, certain of the route's direction, although on the diagonal across the green wheat the walker's line is discernible only to the faintest degree. I enjoy the pleasure of wading through the crop on the sandy soil, much as one would find delight in crossing virgin snow, and then stop in the middle of the field to look behind me. I'm surprised to see that the wheat has closed over my track again. You wouldn't know I'd been there, and in the moment I find a metaphor for my existence. For all that in my human arrogance I think I'm so significant, I have to accept and understand that I'll leave very little mark on the ground.

Stats man:  14 km. Just a shade under five hours (I went very slowly today). 24 degrees C. Two stiles. Seven gates. Six bridges. But when is a bridge a bridge? A rather subjective matter this, but I tend to include the smaller ones which prevent me getting my feet wet, and sometimes ignore/fail to notice the bigger ones. And when is a gate a gate? Also a matter of opinion. I count gates I actually have to open, but on this walk the farmers have often very thoughtfully left a clear person-shaped space beside the closed five-bar. Stiles? Getting fewer, I reckon. Perhaps because they're more expensive to maintain than gates?  One church: shut. Walkers: not a single one - from the leaving of Raunds unto the returning of the same.

Lord
Help me to lift my eyes to You
From the turmoil of everyday life
The deluge of communication
Social media
Gossip and trivia
Argument and counter argument
Alternative facts and temporary truth.
Let me be astounded again
By the thrill of Your creation
And Your care for us
And to remember (thank you Sarah)
That we are fearfully and wonderfully made.
By Your grace
Sanctify all our lives.
Amen


And then came the news from the Manchester Arena. A waking-life, shared nightmare.