It's only a couple of weeks since a regular phone nuisance, selling double glazing I expect, stopped bothering us with an unseasonal recorded message beginning: 'Now that winter's here...' But it's February-chilly again today despite the bright sunshine. The easterly wind whipping in over the exposed fields near Irchester is shading out of brisk into brrr!

I think the writer Peter Ackroyd's very good on what could be called the idea of 'persistence' - the notion that a trade or attitude hangs on in the same place right across the centuries, despite more widespread changes in culture, politics or religion. Sometimes this can be because of the presence of natural resources, and sometimes just because of tradition or human reluctance to move on - if it ain't broke, don't fix it!  In the central belt of Northamptonshire, it's the ironstone which determined the pattern of life, and years after the resource has been largely worked out, the light industry and untidiness which accompanied its exploitation makes for a semi-urban landscape that isn't always beautiful - which isn't to say it lacks interest. But walking here reminds me of the way things often are on the long distance paths around Greater London.

My intention had been to believe the OS map, and follow the road from Irchester to the A45, cross it with trepidation, and track the marked Nene Way down past Chester Farm, the history of which dates back to Roman times (you'll have guessed from the name, and may remember from my late summer 2016 posts about the Irchester area). However, on the far side of the trunk road, the stile's overgrown and there's a 2015 notice telling me the Nene footbridge beyond the Farm is closed. There's nothing for it but to lug myself reluctantly up beside the dual carriageway as far as the Ditchford turn half a mile away. Thereafter there's another bout of precarious road walking down to and over the river to pick up the Nene Way on its re-route eastwards from Wellingborough.  From their enthusiastic website I can see that the archaeological work at Chester is ongoing, so that's the likely reason for the path changes. If so, my annoyance is assuaged. Let's hope the archaeologists' funding is being maintained in these straitened times. 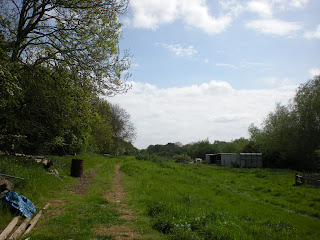 Even after the detour (and hey, this is a pilgrimage, so whoever said I deserved it easy - and I'm not exactly scaling endless flights of stairs on my knees!) the path is scrappy. Smelly too. Sewage plants are often built to the east of major conurbations to use the prevailing wind to good effect, which is fine until a meteorological 'block' like the one we're currently experiencing comes along. The Billing facility is currently delivering some pungent pongs in our direction at home, which would more usually be dissipating in the fields towards Earls Barton. Down by the river just here, there's a history of traveller encampments. In the early eighties there was a notorious murder at Ditchford amongst the traveller community in which we were briefly and accidentally caught up. We were short-term fostering at the time, and were contacted for assistance because in the absence of reliable witness information the cops had brought in whole families for questioning, thus dumping on Social Services a very sudden, very tricky problem in terms of accommodating the children. We turned them down. The brief was too difficult, and there was a lack of immediate candour which spoke poorly of the various agencies involved. I'm not sure a culprit was ever convicted. The community closed ranks.

I simply endure this stretch of the Nene Way. In addition to the overpowering smell of poo processing, the path is manky and rarely walked these days: the lakes which remain after the gravel extraction are threatening rather than an amenity (although they're probably very good for bird life). The area's clearly attracting trials' bikers on a regular basis. The access to the south is closed because of the vast new shopping complex being constructed where you could once break an ankle at the Skew Bridge dry ski slope. Just about every Council in Northamptonshire opposed the plan, but in the name of regenerating the area, the government expedited matters with unknown consequences for the surrounding towns' economic development. Overhead scream USAF F-35s visiting Suffolk for testing, training and evaluation. They temporarily drown out the birdsong. I am disgruntled.

Things improve at the bridge which spans the A45, carrying the walker towards the tall spire of St. Mary's in Higham Ferrers. I stop and fidget for a while, taking some pictures, searching through my many pockets because I think perhaps I've dropped my map, and so fall into brief conversation with Graham Bell and a companion, who are exercising dogs, and judging by their field glasses, doing  a little gentle twitching. I'm wearing my North Face sweatshirt, and Graham thinks I might be a superior breed of walker to the one I actually am. I explain myself, and it turns out Graham is a retired vicar, who still ministers in a variety of situations, and even knows our own parish a little. 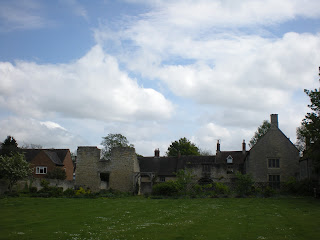 Up in refined Higham Ferrers, everything's peachy. I visit the garden of Chichele College. This was a chantry, not a school, built by a Plantagenet Archbishop of Canterbury, Henry of that ilk, so that a team of clergy could pray for him, his family and the monarch. Sensible precaution, that last bit, I reckon. Henry managed to remain Archbishop for thirty two years which strikes me as impressive longevity for any period. Shaded from the wind, the cloister garden is peaceful and warm, but the lure of the Coffee Barne is hard to resist. They attempt to palm me off with a £5 note which will cease to be legal tender this Saturday, but I don't hold it against them: the coffee and the choccy croissant are good.

There was once a castle in Higham Ferrers too, though the bit on the recreation ground you think might be its site, is just the rabbit warren which the inhabitants encouraged outside the main walls (rabbits being good to eat, natch). The site of the real inner keep is barely detectable by the suggestion of a mound on the edge of later housing just to the south. Simon Jenkins rates St. Mary's church as a three-star, and apparently the stained glass is beautiful. He wonders how it escaped the predations of the Civil War. I have to admire from outside the spaciousness of the buildings, their stately situation, the elegant flying buttresses. Given the tourist potential of the town, this is a church which really should be open, but it isn't, not today anyhow.

At one time during our teaching careers Sue and I knew Barbara Smith, the first headteacher of the Ferrers comprehensive, through a mutual interest in the Inter-Schools Christian Fellowship, and fancied working for her because we liked the cut of her jib. I think at least one of us applied cheekily for a post beyond our reasonable expectations, but were turned down. We were attracted by the idea of a new, frontier project in what then as now was the better end of this mid-county conurbation. But things happen in schools. Its high status didn't prevent the deputy head, Mike Cousins, from being wounded by a disturbed pupil wielding a shotgun a few years later. I walk along the length of the school playing field, still impressively substantial, and join the Greenway which follows the one-time trackbed of the branch line from Raunds down into Rushden.. 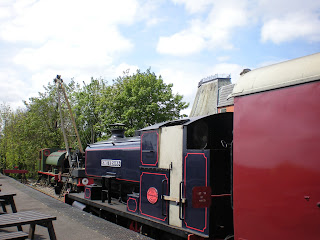 And rather to my surprise, I find a heritage railway project on the outskirts of town with a nicely restored station building. Looking at their website later on, it seems to me that some headway has been lost amidst the rag-taggle collection of shunting engines, old carriages, a mail-coach, a diesel railcar (of the variety which used to work the Brackley to Banbury line in the sixties)), several vintage fire engines and countless other bits of heavy engineering bric-a-brac. What do you do with all that stuff, assembled over three decades of preservation work? It would take an army of workers just to get rid of it again, let alone turn it into anything useful. Nevertheless, there's a half mile stretch of track, and the website speaks of ambitions to extend to Higham Ferrers one way, and to a junction with the Midland Main Line at Wellingborough, although that idea may already have been kyboshed by the need to increase passenger capacity out of Wellingboro' to St. Pancras as the town grows.

The heritage railway makes total sense to me in the context of industrial Rushden's past. Maybe some of the enthusiasts are people who worked all their lives in engineering, and miss it. The shoe industry has largely gone, but still just opposite the station stands the Rushden Town Band Club, and a little way up the street, there's a traditional shoe-repairer's shop.

I pray my way around the town, visiting the three Anglican churches one by one, all with their differing traditions and styles. It's Polling Day for the local council elections, and St. Peter's hall up on the Midland Road is open for the casting of votes, although I see no one going in or coming out. At the opposite end of the town centre St. Mary's is hosting ninety primary school children who have come to find out ' a bit more about the church', as the contemporary syllabus challenges them to do. And out on the seventies-build Whitefriars estate a third more charismatically inclined congregation meets of a Sunday to praise God in the local school. For various reasons I do not effect entry to any of these places of worship, so remain something of a neutral observer. But as I look upwards along the charmingly undulating High Street at the faded grandeur of the buildings from Rushden's Victorian heyday, I begin to feel more warmly inclined to a place which in times past has caricatured itself as somewhere for the lame and insane. Just Northamptonshire wit and irony, of the sort you can still occasionally hear in the county's better sporting venues! The stand-out shop on the main drag? Without question it's House of Venom Reptiles where for just £85 you can buy yourself a Reticulated Python should you so wish. Every Goth should have one.

Stats man:  17 km. 5 hrs. 15 degrees. Cold wind.  Sun and then rather more in the way of cloud. Railways: two - the Midland Main Line & the Rushden, Higham and Wellingboro'. Dog walkers by river: also two, one nervous and female, the other male and dour.

Lord
People so involved
Pigeon-fancying
Birdwatching
Playing bowls
Throwing axes
Ceroc
Model railways
I could go on
And on.
Do you find this weird kaleidoscope creation variety
As endearing as I do?
Or like my dad
Do you discount it all as trivia?
Do you really want us
Down the church instead
Making our sacrifice of praise?
Could it be that we're worshipping you
By an inordinate interest in snakes
or Liberian postage stamps
If we will only acknowledge
That you are the Lord of
Anacondas
And Overprinted Fiscals?
Honestly, I'm not being obtuse.
Just once again yours puzzled
Vince